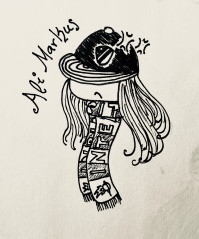 (Editor’s note: What follows is an op-ed and does not reflect the collective opinion of everyone at FBI blah blah blah, etc., etc.)

When Taylor Swift won Album of the Year for “Fearless” in 2010, she was criticized, which often happens when Taylor Swift achieves any modicum of success. In this instance, her critics claimed that she could not possibly have pulled her own weight in the writing sessions that resulted in an award-winning album’s tracks. She responded by releasing “Speak Now,” her third studio album, penned solely by her.

This is the approach I took to drafting the Midwest Summer Fantasy 2016 Orange team.

I have long been sick of the way women are treated in quidditch. I have been the open girl behind the hoops, waiting for a pass that never came. I have stood behind hoops and watched my male teammates get tackled to the ground, beat in the face, prevented from scoring, and forced to turn over the ball while I was available for an easy pass-and-dunk the entire time.

I play a sport where girls are rarely captains. Girls are rarely head referees. This is a sport that has roughly an equal amount of male and female players, but who declared it a huge feminist victory when a girl was chosen as Ref of the Year. A sport where both domestic major organizational bodies are headed by women, but captains still consistently prefer to stick their girl players behind the hoops and let the boys run around and claim the spotlight. This is a sport that claims to be inclusive.

As a first-time GM, I knew what I wanted my strategy to be from the get-go: DRAFT ALL THE GIRLS.

Now, this wouldn’t quite work in order to successfully follow the gender rule. So for the 15 spots on the team I had the opportunity to create, I chose five male players and ten female players, including myself. I’m tired of playing entire tournaments with one or fewer subs, while I watch the boys sub in and out all day. Here was a chance to flip the script.

I’ve watched or participated in enough fantasy drafts to know that typically the high-value players are the most veteran, versatile, or well-known male players, so I played my cards close to my chest. I lucked into getting the first overall pick and chose David Becker of Mizzou, then Jim Richert of Michigan State. Two strong beaters who I could pair together to play aggressively in front of my quaffle line. I headed that up with Max Meier, keeper and seeker from Minnesota Nice, to lead my quaffle line. I had two strong beaters, a strong keeper, and after those first three rounds, I only picked two more guys, and waited until the ninth round to do it – Matt Melton of Lake Effect Tempest as a keeper and Tim Leible of Mizzou as equal parts chaser and beater.

I focused on female chasers because I am one.

Here’s what I learned from this experience:

1: This is an extreme way to effect change.

No one was really ready for this approach. We played David and Jim off brooms up as a double-male beater set, while Max kept a quaffle line of Mae, Meyessa, and Natasha better than I even imagined when I plotted this team on a bunch of post-it notes. In the beginning of the day, I noticed all the female chasers falling into their own styles, myself included.

Unfortunately, it hurt us. The starting quaffle line was made up of three players who consistently got swung out to the side for a dish, not pushed forward to muscle through.

I picked players who I have always thought were underutilized in the regular season. Mae Overholt is always in exactly the right spot when she’s playing for for CMU, but her team is made up of a million guys who all have considerable ability and experience. Natasha Pascal has always been good at sneaking past opposing defenses and screwing them up. Meyessa Mansour will match up with anyone who comes at her on defense, but often doesn’t need to because she has teammates who are larger than her.

I did not take the underutilized approach with the guys I chose. I wanted to get the absolute most out of each male pick, because I knew I wouldn’t be making many and the whole point of this strategy was to get the most out of every player I chose. I chose Jim and Max because both of them play their primary positions well and are also great seekers. Max and Jim both grabbed snitches in close games against Tempest last USQ season, and I think that playing with the players who have burned you in the past is a really great way to learn.

I always planned to overutilize my guys and create a lot more space for my girls. Gone were the days of overutilizing a female beater who holds the ball at the hoops or a female chaser who runs down to the hoops, runs back to defend, and repeats. The original, playful version of this strategy involved only drafting two male players at all, but that seemed mean.

First and foremost, we usually just run and stake out the space behind the hoops. Overall, we have much less primary ball-handling experience than our male counterparts. I would argue that the sport itself still lacks perfect integration. Sure, representation on-pitch is regulated, but there is a wide margin of parity even within each position because the community and its leadership has not worked to develop players across multiple genders.

I firmly believe that any player can make any play with the right development because it truly all comes down to confidence. I once raced a go-kart against four drivers with significantly more experience than me: one has raced sports cars competitively, one has raced quarter-midgets on dirt tracks across the country, one grew up karting, and one has made multiple Indianapolis 500 appearances. I drive a minivan. It was no surprise when the timing sheet showed me finishing at a very large margin behind them. When I commented on my natural proclivity to drive with one foot on the brake, one of them told me, “If you had been doing this since you were little, you wouldn’t be afraid of standing on the accelerator. It’s about developing confidence.”

Practice is where you throw to the girl who drops the ball. Eventually, she’ll catch it. I know because I used to be her. With enough repetition, you’ll find yourself asking “Will she score?” instead of “Will she catch it?” But if all you do is throw it to her when she’s next to the hoops, she’s never going to learn how to run through a defense. She’s not going to get very good at blocking a bludger if the only time she releases a quaffle is to dunk it through a hoop three feet away.

3: We had no primary point chasers.

Most of the girls on this team were shorter than 5’8”. Height alone does not a great point chaser make, but the point remains that rarely does Meyessa get to flex her point-chasing muscle. I felt a little bad about matching her up against a full-throttle Dylan Schepers, because he is a terrifyingly large human. I vividly remember the thought that ran through my head when he was hurtling toward me was, “Ohmygodyouguyspleasedon’tmakemedothis!”

An all-female chasing line will point out quickly how rare female point chasers really are.

First game, Tim Leible comes up to me and says, “Ali, problem! We’re running five girls!” I look out and count. Jim is in the seeker box with a yellow headband, Mari has subbed in for David, and Max is the only guy on the pitch. David literally just came off the pitch, Tim is poised to sub for Jim, and Matt Melton is Max’s sub, so my only strategy was to ask the scorekeeper how much time was left before seekers were released and pray that the refs didn’t notice anything until after the 10-second countdown. Once Jim was released, the rule would shift to Five-Maximum instead of Four-Maximum, and it would no longer be an issue.

Frankly, I don’t feel bad about breaking this rule in this way, because it was not intentional and proves my point: favoring one gender in your overall strategy places a burden on your minority-gender players, and when you don’t time it right, suddenly they’re all tired at once. I intended to bend it as far as I could, and I don’t want to prove my point by disrespecting the game. But since fantasy is for-funsies, I seized the opportunity to make these points in a laid-back setting. We’re conditioned to look at a pitch and make sure there are two girls out there. There certainly were.

Fantasy is filled with coulda-shoulda-wouldas—especially Midwest Fantasy, which has seen a Day 2 rainout two years running. What I’m proudest of this year is our win against the purple team. I drafted this team to prove a point, and I drafted this team because I believe in it—both the argument I’m making and the people I chose to help me make it. Had we gone winless, that point would not be so relevant. However, if you look at our 1-3 record and think that we failed, then you’re the one who has failed to understand my point.

How does a team that looks this good on paper go 1-3? Well, maybe go back and re-read points 1 through 4. Throughout the day, we became an increasingly more cohesive team. Our first game against Red was rough, and we were hanging in there before the snitch came on pitch, but Red was able to pull away. We stayed in close range in the second game with Blue, and the active variable of the snitch didn’t fall our direction. The third game with Pink was more unpredictable than we realized, and it just got away from us. But the fourth game with Purple was what proved to me that I hadn’t just thrown 14 of my friends under a bus for the sake of making a point. We figured out what worked for us, and everyone finally gelled. We came in third in our pool, and I wish I could see how much we would have continued to improve in a double-elimination bracket. I loved playing with this team, and I wish we had a little more time to do just that: play.

The worst part about all of these problems is that they are so normalized that girls internalize and believe them. They believe that their natural strengths are being the wing chaser nobody notices. They think that “sneaky” is just their own tendency, not something they’ve been trained to hone. The reality is that they’re good at it because that’s all we’ve let them get good at. You can’t fight something you don’t notice.

Why is it always a surprise when the girl behind the hoops dishes it in? Why do we call girls “secret weapons” and cheer louder when a girl completes a tackle? The most inclusive sport I know still treats female athletes as novelties.